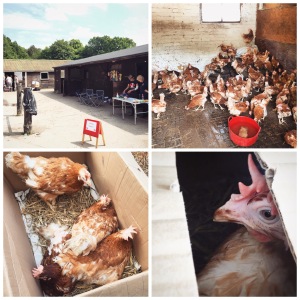 A bit before the summer, my work registered with the British Hen Welfare Trust to get some ex battery hens. We had this idea already for a while, but now the chicken run was ready. They let us know that there would be a pick up day on the 10th of June (2018). So that day I drove towards Reading, where I was going to pick up some hens. I was so excited! Giving these beautiful animals a second chance in life, after living in such unfair circumstances, was giving me goosebumps! It’s aways a surprise in what condition they are. Some hens still have quite some feathers, but some are all bold. The pick up place was at a beautiful university and it was nice to see that too actually. As the place was quite big, there were a lot of signs telling me where to go. Eventually that lead to some stables in the back. I parked my car and got out, armed with a big, straw filled box. 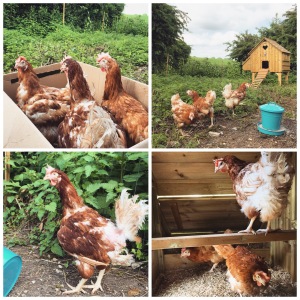 Before getting the hens, you have to register and tell them how many hens you’d like to take home. I was going to take 4. Then I made a donation. They suggest £5 per hen, but it’s totally up to you. I think it’s nice to give them some extra, because they’re doing such good work and it’s all going towards another rescue. Once that is all done, you can go to one of the stables. I was second in the queue, so I didn’t have to wait very long. The stable was full of chickens. The stables weren’t very big, but I’m sure that they never had so much space in their life ever before. They were all in the corner, being scared obviously. Being in the light, with so much people around them. It was all new to them. The people in the stables caught 4 chickens and put them in the box and that’s that. Time to go home!

At home I put the box in the chicken run and opened it slowly, not to scare them too much. They were all a bit stressed, on their tummy, with their beaks open. Poor babies! I didn’t force them, but let them get used to their surroundings. They stood up and looked around and after a while I picked them up carefully and.. there was the moment.. for the first time in their life they felt dirt and grass. They walked very funny, stretching their paws and lifting them up very high. They were looking at the ground, walking around and it was just so lovely to see. It was a beautiful day and the sun came out. When they felt sunshine for the first time it was like they couldn’t believe it. They dropped on the ground, spreading their wings, putting all their feathers up, closing their eyes. My heart was smiling so much!

The next day they started to lay eggs (that I’m obviously not going to eat). Most of them looked alright, but one of the chickens has really big eggs. You can see on the picture how huge! Her eggs are still not very normal nowadays. A lot of times they’re still very big, the shell is very thick and chalky and yesterday she laid a wind egg. I really hope that her eggs will get better though, because it can be a bit dangerous. They became friends with the 4 chickens we already had too. In the beginning they didn’t hang out together at all. Now they still like to hang out in 2 groups sometimes, but they definitely became friends.

Because they are used to living in a small cage, they do not get into the chicken coop or on the perch by themselves. So the first few days I had to put them into the coop, onto the perch. They instead just randomly chose a place to sit when it was getting darker. After 3 days of doing this they got it though. So clever! Now 1-2 sometimes still sit on the bottom of the coop though, but at least they’re safe in there. They’re doing so much better now and they look so much better too. Their feathers look better (not perfect yet though) and their faces and comb are all red now. It makes a huge difference. If you look at the picture, you can see them on their first day and the way they look now. Their faces and comb were as good as white and now they have such a nice colour. They roam free every day now and they love it! It makes me so happy to see them so happy every day!

Would you like to rescue some hens too? Then go to the British Hen Welfare Trust and register now! They rescue 50.000 chickens per year and seeing them enjoying life is so worth it. Do you already have some rescue hens? I would LOVE to see them. Please show them to me! You can do this by tagging me or by using #PlanetManel on Instagram. Thank you! X