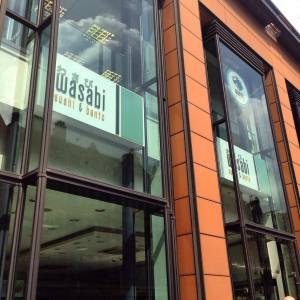 Who loves sushiiiii?? Sushi is heaven! I just won’t believe you if you say differently. And though people mainly think of raw fish, I think of sticky rice with veggies and delicious seaweed. My personal favourite sushi place is Wasabi, because I like to get sushi on the go, as a quick lunch or take away. Wasabi is perfect for that. There are a lot of Wasabi restaurants in London (39 to be precise), and their sushi is very nice.
In the most Wasabi restaurants there are at least some seats, but there are a few which are a bit bigger than the average one. For this review I went to the one in Knightsbridge, across from Harrods. This is a nice big Wasabi and if you don’t want to, or it’s too busy to eat it there, you can always have a seat at a very nice Starbucks next door. 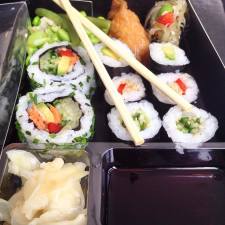 What I mostly eat whenever I’m at Wasabi is the ‘mini veg set’, a few extra avocado and cucumber hosomaki’s and a seaweed onigiri (truly addictive). I also always get an extra pack of ginger. Before I start eating I make my plate look pretty. Putting the soy sauce and the ginger (and some wasabi when i’m in the mood) in the little containers, unpack the extra hosomaki’s and put it all together. Doing this all before actually eating it directly is actually really nice, almost feels like a ritual. I like making time for it and even doing it for others whenever I have company. 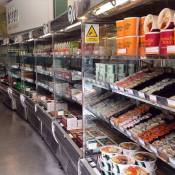 Something very exciting is that very recently they have a brown rice veggie set!! As you probably know, white rice isn’t that good for you. Now they have brown rice sushi available it’s so much healthier. Especially because the amount of seaweed you’re eating too. I was almost euphoric when I found out. Of course I bought a box instantly and it tastes lovely. I hope in the future the onigiri and much more sushi will be available with brow rice too! 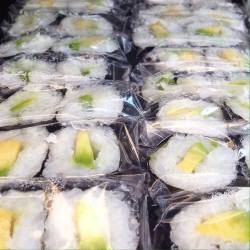 The atmosphere is a the same in every restaurant. Their interior is white, with green transparent round chairs and glass tables. It’s quite cold, but because it’s so typical Wasabi you just go with it and you even start to love it.
The only thing about Wasabi I really don’t like is that they create a lot of waste. Everything is packed. A lot of plastic going on there. I would like to see that change.

What is your favourite sushi place? Anybody who likes to go to Wasabi too? Please let me know or show me by using #PlanetManel on Instagram. Thank you! X