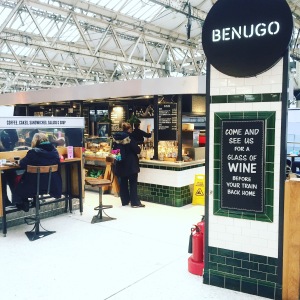 When I used to live in Shepherds Bush, I went to Westfield quite a lot.. Quit often.. or let’s say, all the time! A lot of times I went to this lovely cafe, called ‘Benugo’. They served really nice food, but mostly I got this really nice green tea they have. Most of the time I went here alone, but I often met a friend there or I took my laptop with me to write the book I was writing at that moment. It was quite a big cafe and it was perfect for me. Everybody I knew liked this cafe, but sadly, one day, they closed down and it was replaced by.. Five Guys! Like.. how? This is one of the most horrific replacements ever in my opinion. Benugo has cafe’s, but some of them also have a kitchen. When I was in Southbank, I went to Waterloo Station and visited a Benugo cafe, to see what vegan options they have these days.

I looked at all the food, checking for vegan food. There wasn’t a lot of food in general, but there was a vegan falafel salad. When I asked one of the staff members, he said it just came in that day. What means, before that, they probably didn’t have vegan options. I’m glad that they decided to add this to the cafe-menu. It looked nice, but I thought it was quite expensive though. It was a small bowl, but for eating in, you had to pay almost £7! I asked if the hot chocolate was vegan and they checked for me. It was, f made with soy milk. The pack even had the vegan label on it. It had been a long time since I ordered hot chocolate.. years really! I also grabbed a little chocolate and so, all together, it was all very chocolaty afternoon snack. The hot chocolate was super nice and the little chocolate.. gosh! It was 53% cacao and it had salted almonds in it. You have to try this!

The Benugo in Waterloo Station is a bit different as it’s in front of the shops and not in a proper building. It’s a nice one though. It’s very vintage, with the stone bar, the reading lights and the wooden chairs. I said at the bar, overlooking the station, with the huge station clock in front of me. It was a nice spot. Though, because it’s not in a proper building, it’s quite cold. A lot of Benugo cafe’s/kitchens are inside a public place. Like this one, inside the station, but they’re also inside museums or even in some John Lewis warehouses  for example. I wish there were more Benugo cafe’s on it’ own though. They’re perfect cafes to take your laptop with you, to do some work and I wouldn’t go to the museum that fast to work there. A very good thing about Benugo is that they try their best to be sustainable. You’d think they’d be all vegan then, but that isn’t the case, unfortunately. Soon I will check out a Benugo kitchen and check their vegan option as I’m really curious now.

WHO? Benugo.
WHERE? Waterloo Station, 19/20 The Balcony, SE1 7LY.
CUISINE? Cafe.
VEGAN? No! (omni)
OVERALL? 7 (delicious (hot) chocolate, but could have been more lunch options)

Do you know Benugo already? Or are you going to try it now? Please let me know! You can do this by leaving a comment below. You can also show me by tagging me on Instagram or by using #PlanetManel. Thank you! X 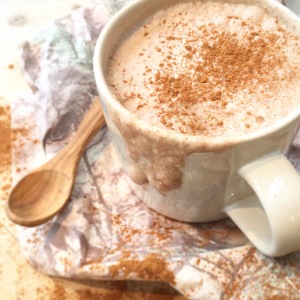 Easyyyy! Sooo delicious! That sums up this recipe. Something everybody needs in life, is hot chocolate. Just sometimes you have to treat yourself and enjoy every sip. This is how I make my delicious hot chocolate and I felt the need to share it with you, especially because it’s still quite cold outside. Tip: It tastes even better after a firm walk. Go out, to a park or just enjoy the London streets. When you get back, you make yourself this and it’s like adding another secret ingredients. Did I already mention that this goodness is guilt free? No refined sugar or other crap. So you can enjoy this to the fullest. I doubled the recipe, so you can share it with your lover or friend. Orrrr.. you can easily safe a portion in the fridge and warm it up the next day. Why not treat yourself 2 days in a row, right?

-Put all the ingredients in the blender and blend for 20 seconds.
-Heat in a sauce pan or if you’re the proud owner of a Vitamix, blend on HighSpeed until heated.
-Sprinkle some cinnamon on top.

Vegan hot chocolate, it’s something everybody needs! Simple as that. Please let me know when you’ve tried it. You can do this in a comment below.. or you can tag me or use #PlanetManel on Instagram. Thank you! X

There is something very irresistible in this world and I’m sure a lot of you will agree with me. This magic is called ‘Biscoff biscuit spread’. It’s heavenly! You have a smooth and a crunchy variant. I like both, haha.. hard to choose. I especially like to eat in on cheap white bread. I know, to make it even more unhealthy. Oops! To protect myself, I never buy it. I only buy it when I’m in Holland, or like now, I had to get it to make this little recipe (poor me). I put it on everything, bananas, apples, crackers, on the Biscoff biscuits, in my porridge.. from the jar! Another ‘Oops!’. Then a while ago I had this amazing idea, to make hot chocolate with it. Here you are..

-Put all the ingredients in the blender and blend for 20 seconds.
-Heat in a sauce pan or if you’re the proud owner of a Vitamix, blend on HighSpeed until heated.

Do you like hot chocolate? Who doesn’t right? I’m sure that you’ll love this one with Biscoff spread, it’s magic. Please let me know when you’ve tried it. You can do this in a comment below.. or you can tag me or use #PlanetManel on Instagram. Thank you! X