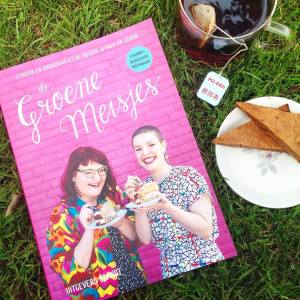 My absolute favourite blog is ‘De Groene Meisjes’. This is one of the first blogs I discovered. Or actually my sister told me about it a few years ago(Lisa, this is really something you’ll like! ..Gosh she was right!). ‘De Groene Meisjes’ is a Dutch blog and the face behind it is Merel. Very recently she is doing it on her own, because at first there were 2 girls, Merel and Jamie. Merel wrote the blogs and Jamie made the recipes. Great team! But Jamie wanted to do some other things in her life and Merel was brave enough (Thank God!) to keep going. I think she is a very lovely and inspirational girl. She is always so positive, generous and I like her no nonsense attitude. One of the things I also really like her is because we have quite some things in common and it’s always nice to read something if you recognise yourself.
She is a great writer(much better than me..) as I always read her posts with a smile. You can almost hear her voice while reading. The funny thing is, now you actually can, because recently she recorded audio blogs and I really like the concept. It’s so refreshing and personal.

Last year they released their(they were still doing it together) first book. And without reading it, it’s an eye catcher already.. no chance you miss it, as it’s bright pink! A while ago my mum won tickets(via ‘De Groene Meisjes’) for a festival where Merel was going to be too. She drove all the way there especially to meet her and bought the book, Merel signed it.. and then my mum gave it to me. So nice, I love it! Thank you, Merel and my mum!
I hope Merel never stops working on the ‘De Groene Meisjes’, because she really inspires me and (I’m sure) so many others. Also this blog definitely helped inspire me to start my own blog.
Because it’s written in Dutch, unfortunately not everybody who reads this will be able to read ‘De Groene Meisjes’, but everybody should definitely take a look.. even if it’s only to taste the atmosphere and to look at the great pictures!

To be honest I don’t actually go to the website of ‘The Green Happiness’ a lot, but I love following Merel and Tessa on Instagram. The main reason why I like them is because last year I came up with the idea to personal coach people to create their unique and perfect lifestyle. Then a few weeks after I discovered ‘The Green Happiness’ and they are doing something very similar, so they inspired me straight away!
Their blog looks super nice though, big compliment for them. Especially their greattt pictures, it looks all so colourful and mouthwatering!

They just finished an amazing project in Ibiza, together with ‘Lisa Goes Vegan’ (another great blogger) and organised ‘The Green Ibiza Escape’. They had different groups and organised all sorts of things. Meals.. exercising.. beauty treatments.. you get the idea. Fantastic initiative if you ask me and it must of been so nice and inspiring to be there! At the moment they’re still at Ibiza to work on their new summer book. So excited!
And what is very nice, their blog also has an English version. Hooray! So go check out ‘The Green Happiness’ now!

What are your favourite blogs? Please let me know in the comments if you like these blogs too or if you have other favourite blogs, so I can check them out! Thank you! X