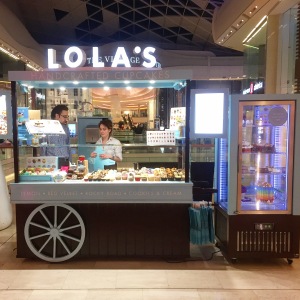 I actually never go into bakeries and cake shops, because they never really have vegan options. And that’s apart from that I’m not a huge fan of cake that is not home-made. Though, the last time when I was in Westfield and I was on my way out, walked past Lola’s Cupcakes and it made me curious. They were already tidying up, but I quickly introduced myself and asked if they had vegan options. I was very surprised that she said yes! ..and she didn’t only say yes because they had 1 vegan cupcake, they actually had lots of flavours: Coconut and passion fruit, lemon and raspberry, chocolate.. oh yes! There was only one vegan cupcake left (lucky me!) and that was the ‘pistachio and cherry’. She gave it to me and I promised to write about it. So here we go.. 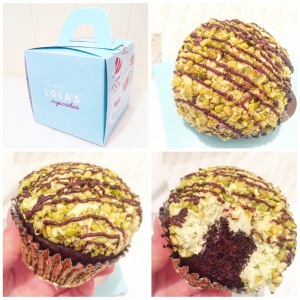 Like I said before, I’m not a big fan of cake that is not home-made. I was a little sceptical about this one too. I was sitting in the bus on my way home and I was looking at the box and asking the cupcake: will I like you?! When I got home I was quite excited to try it though. So I opened the little box. They give you super cute boxes btw.. I thought: even if the taste will not be that good, I’d get one just to have a beautiful looking cupcake in a cute box. Haha! First impression: I had to admit that it looked very tasty. With the green pieces of pistachios and the chocolate.. + it came in a shiny golden case. Taking my first bite I was pleasantly surprised! The cream on top was very fluffy and had a lovely structure. Also the cake itself was very good. The cream is very very sweet though, but the cake is a lot less sweet, so together they’re perfect. It would have been too much if they were both that sweet. I ate it all and I actually really enjoyed it. The only thing I didn’t like that much, was the cherry in the middle, but that is more personal taste I think. I started to read about Lola’s Cupcakes and it turns out they also do big vegan cakes. So if you do not like baking, but you still want a nice vegan cake, I think this is just perfect. Also because you can order them online, super handy!

Did you already know that Lola’s Cupcakes do vegan too? Are you going to try one of these yummy treats? Please let me know when you’ve tried it! You can do this by leaving a comment below, but you can also show me by tagging me on Instagram or by using #PlanetManel. Thank you! X