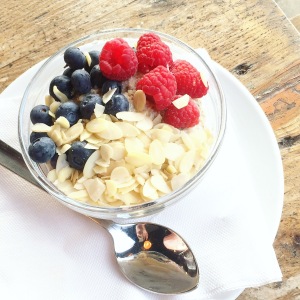 I’ve got a new job since mid January. This means I’m taking a different route to work. So now, every morning, I’m walking past this really nice cafe called ‘Cable Co’. It looks really nice and I wanted to check it out. I live very close to here and so it was easy. I also decided to take my laptop, to do some work there. I found out that it works much better when I work out of the house. Working in my own flat and next to my lovely bed is just not my thing. Haha! So on a Friday morning I went here to see what vegan options they have to offer. I was pleasantly surprised. 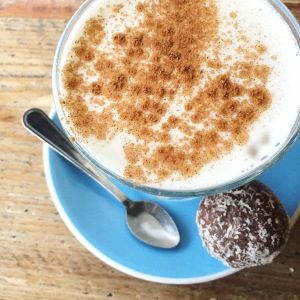 I asked what vegan options they had and they sell 3 types of energy bombs. I chose the coconut one, but they also have a nutty one and one that’s called ‘breakfast’. She also told me that they make the porridge with almond milk and so if you order it without the honey, it’s vegan. Perfect, so I ordered that. One of the best things was that they make their Chai latte with a syrup, what means there is no milk powder. As Chai lattes are my favourite, I ordered that too. I was very lucky finding a spot next to the window and a moment later there was a nice bowl of porridge in front of me, with an even nicer Chai latte. The porridge was very tasty, though I do like it to have a little bit more runny. The taste itself was good though. It would have been amazing if they offered agave nectar, but I must day that I didn’t really miss sweetness that much, thanks to the fresh berries on top. The energy bomb was yummm!

One thing why my eye caught ‘Cable Co’ is because it’s nice atmosphere. It’s black from the outside, with simple, modern, white letters. It’s not a very big cafe, just a few tables and seats. It’s quit industrial, what I like. Though I did have a very nice spot, the seat wasn’t that comfortable. It was a very small wooden bench. Or maybe my bum is just to big.. haha! It’s ok to sit there for a while and chat, but for working a little longer I’ll make sure to pick another seat. I really liked that the staff being very helpful and they kindly answered my questions. They also have another location called ‘Wire Co’, around the corner of the West Hampstead Underground station. So if you live around there, you might want to check that one out and let me know what that one is like. Check out their website for more information.

Do you know Cable Co already? Or are you going to try it now? Please let me know! You can do this by leaving a comment below. You can also show me by tagging me on Instagram or by using #PlanetManel. Thank you! X