*This is the story of my own parents rescue dog, Mouse.*

Meet Mouse! Mouse is a 1 year old Whippet bitch. She was in a shelter for 7 weeks, after she was abandoned and found, before she got rescued by my parents. They rescued a Galgo, named Skye, before from Spain, but unfortunately they had to find her a new home because she was too nervous around their 2 grandchildren. It was very sad, but Skye found a lovely forever home in the end. 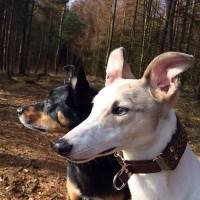 A year later, just out of curiosity and for fun, they looked at some dog shelters and very unexpectedly there was a lovely Whippet, named Maud, looking for a new home. Was this meant to be? Everything seemed to be right. The shelter was quite far, but already the next day my dad went to see her.

He took Maggie, their Australian Kelpie, with him to see if there was going to be a connection between them. And there was.. they were crazy about each other from the first second. They just couldn’t stop playing!

There were a lot of people who wanted to have Maud, but out of everybody my parents were her best match. The shelter had a rule that after your visit you had a week to think about it, before you could take the dog with you, but because everything looked so promising, lucky Maud was allowed to go to her new home straight away.
Nobody was expecting my dad to bring her home that same day, so it was a wonderful surprise. She was so happy to be in a nice house with a lovely garden and 2 new friends to play with. (My parents also have the cutest chihuahua boy, Nynjo)

They named her Mouse instead of Maud and everything is going so well. She is very good with the children, loves her walks in the forrest, cuddles and play sessions(which are basically without a pause) with Maggie and Nynjo. She is such a good, friendly and happy dog!

This was definitely meant to be!

Do you also have a dog you adopted and would you like me to tell his/her story here on my blog to inspire others? By entering you can win a small price too! So where are you waiting for? Please send me a message!